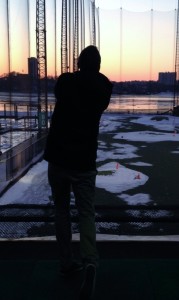 My first job was completed and the audit report signed early in the week allowing my full attention to be focused on my other private equity client.

Myself and three other international secondees won the raffle and got to see the NY Rangers in actions in their East Metropolitan NHL Game.  We lucked out with a 4-4 thriller which ended in a penalty shoot out!  More Irish visitors arrived for the weekend so the early start wasn’t going to stop us enjoying Ireland’s 6 Nations victory.  We also had time for ice skating in Central Park and to check out Chelsea Pier sports complex, where we got to hit some drives out over a frozen Hudson river.