3 September 2016 – Enjoying the culture of Ireland and the US 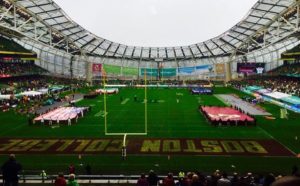 Soon after my family left I was back to traveling for my client engagement and headed off to Galway in Western Ireland. Galway is beautiful and it was wonderful to get to walk through town and go into all the shops from Eyre Square to the Spanish Arch. The project that we were working on in Galway were more difficult but with help from some of my team we managed to complete the jobs on time.

During the weekend, I attended the Aer Lingus College Football Classic where Georgia Tech defeated Boston College. They are not normally two teams I support, but it was a great to see some American culture in Ireland!

On my sixth and seventh week in the office, I continued to work on my first engagement and I was also assigned a special project regarding FRS 102, which was quite interesting. On the last weekend of September, Octoberfest was in Dublin at George’s docks, so I was sure to go down and enjoy a stein!