On 25 September 2018, the Minister for Finance and Public Expenditure and Reform, Paschal Donohoe TD, announced the appointment of four new members to the Credit Union Advisory Committee (CUAC), including Diarmaid O’Keeffe, Partner and Head of Audit, EisnerAmper Ireland. 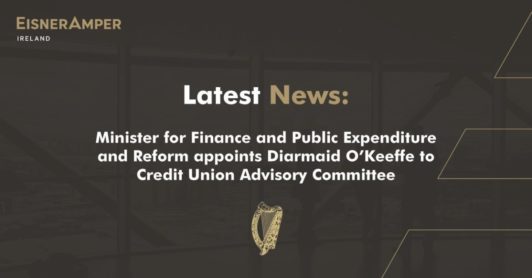 Speaking in relation to the appointments, Minister Donohoe stated; ‘These four new members ensure that the CUAC is well balanced in terms of diversity of experience and expertise which includes academia, business management and financial analysis, and will complement the existing members of the Committee who are Credit Union management. I wish the new Committee members well over the next three years and I am confident that they will make a valuable contribution to the CUAC’s work.’

To read the original press release from the Department of Finance, click here.

At EisnerAmper Ireland, we design business and compliance solutions to make trade happen.

We have advised over 200 credit unions, including working with and auditing some of the largest credit unions in the state, advising in relation to the largest merger transactions and providing training and consulting services to Senior Management including those responsible for the Head of Finance role. If you have any questions in regard to EisnerAmper Ireland’s services to the Credit Union sector, contact Diarmaid O’Keeffe.