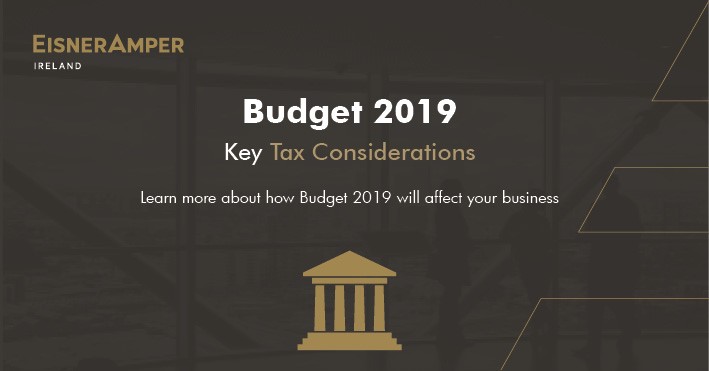 The Minister for Finance and Public Expenditure & Reform, Paschal Donohoe TD, announced that the relief is to be extended for a further three years. The relief will, therefore, be available to companies which commence qualifying trades in the period up to 31 December 2021, where relevant conditions are met.

As this relief is linked to the amount of employer’s Pay Related Social Insurance (PRSI) paid by a company in each accounting period, it continues to support job creation in the start-up sector. A company can benefit from a maximum tax credit of €40,000 per annum in its first 3 years of trading.

This measure, introduced in Finance Act 2017, is being amended and will commence with effect from 1 January 2019. Its purpose is to incentivise employers to provide fitness and/or childcare facilities for the use of their employees, by providing an accelerated deduction for the capital investment costs incurred.

In line with European Union Anti-Tax Avoidance Directive (ATAD), the Minister announced changes to the existing Irish Exit Tax regime. These changes are in effect from 10 October 2018.

Under ATAD, EU member states are required to introduce or update existing rules to ensure they are in line with EU provisions by 1 January 2020. These rules seek to tax unrealised gains where assets are migrated from Ireland, and as a result, are removed from the scope of Irish tax. Any gains falling under this provision will be subject to tax at 12.5%, rather than the existing Capital Gains Tax (CGT) rate of 33%. There are specific anti-avoidance rules which prevent transfers/migrations benefitting from the 12.5% rate if the main purpose of the transaction is to benefit from the lower tax rate on unrealised gains.

There are no longer exemptions from exit tax for certain companies which are foreign-owned.

The Minister noted that a review of Ireland’s TP regime would be conducted in 2019, including a public consultation. It was previously confirmed that updated TP legislatiocn will be included in Finance Bill 2019. These updates will also include the formal adoption of the OECD’s 2017 TP Guidelines into Irish domestic legislation.

The VAT rate for the tourism and hospitality sectors will increase to 13.5% with effect from 1 January 2019. This VAT rate had been reduced to 9% in 2011 as part of a stimulus measure and Budget 2019 has returned to the pre-recession rate for these sectors.

The increased VAT rate will apply to restaurant and catering services, hotel and holiday accommodation, shows, exhibitions and cultural facilities. In addition, disposal of waste material, repair and maintenance services, hairdressing services and the supply of live horses and greyhounds will return to the pre-2011 rate. Such an increase will result in an additional €466 million for the Exchequer but has been heavily criticised by the industry.

The 9% VAT rate will continue to apply to printed newspapers and sporting facilities.

The VAT rate on electronically supplied publications will be reduced from 23% to 9% with effect from 1 January 2019 following recent EU developments in this area.

There is no increase in the excise rate for diesel, however, any new diesel engine passenger vehicles registered from 1 January 2019 will be subject to a 1% Vehicle Registration Tax.

Amendments were announced to the KEEP scheme which was introduced in 2018. The ceiling on the maximum annual market value of share options that may be granted by an SME will increase from 50% to 100% of the annual salary. The overall value of the share options also increased from €250,000 to €300,000. However, the three-year limit has now been replaced to a lifetime limit. The maximum value of options that can be granted in a year remains at €100,000.

The 0% BIK rate for employers providing electric cars or vans has been extended to 31 December 2021. A cap of €50,000 on the original market value (OMV) of the car or van that is exempt from BIK is applied from 1 January 2019 and any amount in excess of €50,000 is taxable in the normal manner.

The hourly minimum wage will increase from 1 January 2019 to €9.80. This has been introduced following a recommendation from the Low Pay Commission.

The Minister announced an increase in the income tax standard rate band of €750 for single and married individuals (one earner) and €1,500 for married individuals (dual earners). Therefore, the 20% tax band has been widened and it will mean that individuals will reach the higher rate of tax (40%) at €35,300. USC band for the 2% rate has increased by €502 to €19,874 and the 4.75% rate has reduced to 4.5%. These changes in USC will benefit all taxpayers.

The earned income credit has been increased by €200 to €1,350 in order to minimise the differential in taxes payable by self-employed individuals and employees under the PAYE system.

The tax-free Group A threshold for gifts or inheritances from a parent to child has increased by €10,000 to €320,000. This is expected to rise further in upcoming budgets.

At EisnerAmper Ireland, we design business & compliance solutions to make trade happen. This is what we do everyday.